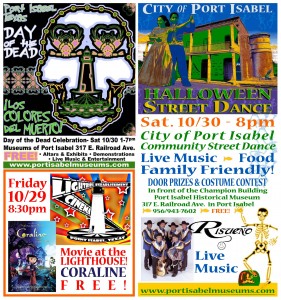 Port Isabel has big plans for the Halloween and Day of the Dead Weekend!

Beginning at 8:30 p.m. on Friday, October 29th, the Lighthouse Establishment Cinema will be hosting the last show of the season featuring “Coraline”. Free, family fun at the Port Isabel Lighthouse! Concessions are available.

On Saturday, October 30th, from 1 p.m. to 8 p.m. Port Isabel celebrates Day of the Dead! There will be special exhibits in the Treasures of the Gulf Museum, hands-on activities, sugar skull making classes, special presentations, live entertainment, over two dozen vendors offering food and day of the dead crafts and more! For a preview watch Rick Diaz’s Con MI Gente on Thursday morning at 5:30 a.m. and again at 6:20 p.m. on KRGV Channel 5. For a complete schedule of day’s events, click here: http://portisabelmuseums.com/mopi/2010/10/day-dead-los-colores-muerto/

Then join us for the City of Port Isabel’s HALLOWEEN STREET DANCE! Beginning at 8:00 p.m., Risueno will provide live music until 11:00 p.m. Vendors will offer all kinds of great food, there will be Door Prizes and a Costume Contest!

LOCATION: Museums of Port Isabel, 317 E. Railroad Ave., Port Isabel. 956/943-7602. Free admission to the Museums throughout the day. Museums hours will be extended until 6:00 p.m. The Lighthouse will be closed until further notice as repairs are made to some of the steps.

RISUENO: About the band… risueño, -ña adj. 1 Que muestra un gesto de risa en el semblante: entró risueño y le preguntamos por qué estaba tan contento. 2 Que se ríe con facilidad. 3 Que tiene un aspecto agradable. 4 Que es favorable o prometedor: parecía que el porvenir sería muy risueño. Translation: happy Risueño started 12 yrs ago in Brownsville tx. Some of the music performed by Risueño is original lyrics together with plenty of cover songs by other major artists but with a risueño style. The Style of music Risueño performs is targeted towards a family atmosphere. Lots of rapid, move your hips Cumbia’s, and Huapango’s which in most part intended to have the crowd forget; unwind and loosen up on what comes with a hard days worth of work and stress. Risueño’s band members consist of Dad (Sabas Lopez Sr) who plays the squeeze box Accordion and (Sabas Lopez Jr) who is the lead singer and stums the 12 string Guitar together with the runt son of the family in the drums (Daryl Lopez) together with fill in precussions. Risueño has recorded 5 music cd’s and has given out 1000’s of cds in concerts and private events over the past 12 yrs.